What Happened After Vegas....

Well here is the aftermath...

We got home about 8am Wednesday morning, we had to wait a while at Gatwick airport for our taxi. It was so cold in the UK compared to Vegas, glad i wore my warm clothes. I slept quite a bit on the plane as i was so tired, i did watch Toy Story 3 and Jeff Dunham spark of insanity though... which was Awesome!
I wanted to watch more films, but i fell asleep on the end credits of Toy story 3, and woke up about 4 hours later! haha. 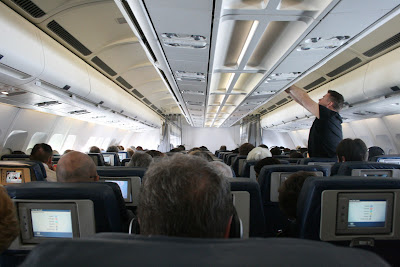 Once we got home and realised just how Jet lagged we were, the decision was made that we would leave the dogs in the Kennels for one extra night so we could rest. i lasted until 2.30pm then i nearly fell asleep in the bath and gave up and went to bed, i think i woke up at about 10pm, so i made mike get up and we had something to eat and watch a bit of TV with the intention of going to bed again at midnight.. mike did, However i got carried away with loading photos onto face-book. I made it to bed at 2am and wasn't that tired, but i woke up at about 12 the next day... too late to pick dogs up, so we had to wait until 4pm then we could go get our boys! wooo - They were happy to see us, a bit hyper which was cute. They were SO tired when they got home, they literally slept for 24 hours, its was so funny, and nice!

We had 2 days to organise the Reception for our family and friends, so i got on the phone to the venue to chat about food etc - firstly they tell us they want more money... £80 more, so i said .. well shouted No way, and that they agreed a price, so im not paying any more just because they have new management! So after i went a bit Bridezilla on them, it was all ok. I went through all the decorations i had bought, made sure we had enough of everything etc

We spent so many hours printing photos off, making a slideshow and also making a Guest book photo frame.
Well i made it... i went and bought a frame which was already pre filled with a set of three images, so i covered the backing with oil pastel paper as it had a nice texture. I then covered the seams with red card, as technically red was part of our theme. Then i printed 3 photos off which were scanned copies of our original wedding photos (my theory was that if people got drunk and de-faced them, then i could peel them off and stick the originals in their place) On the picture front we did fine, no de-facing, although we did get drunken writing but nothing rude thankfully!

We spent Saturday day time, dropping the dogs back at the kennels, then going to the venue to start blowing up balloons, moving furniture around and just generally making sure everything was A- ok.


I forgot to take photos of the finer details... but basically i made balloon weights out of old poker chips and a round hook. They cost hardly anything and looked so cool! i then scattered old playing cards, poker confetti and poker chips along the table to make a runner. It really had a good Vegas theme, so i was really please and so was mike.

My cousins made our Cake as our present, it was amazing - and tasted awesome too! 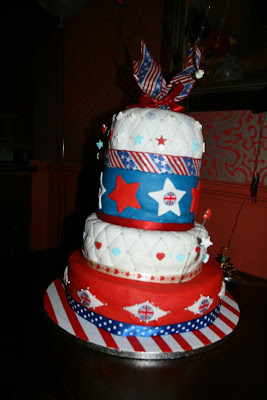 They also made a box for all of our cards to go into which was so funky, and saved any cards with money in going missing. i struggled to get my hand in to get them out at the end of the night! haha 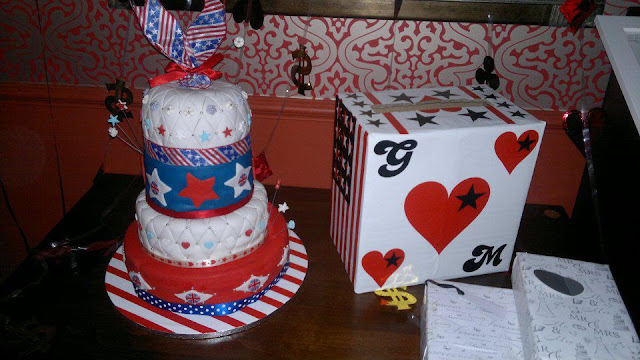 The night was a success, we had a really good time, and saw all of our family which was so lovely.
Here is a load of our photos..