I was on the hunt for a new Mascara... I have no reasons except i wanted one. The others i have work perfectly well, but i just Needed wanted a new Mascara to Oooh over. Then Fate happened... 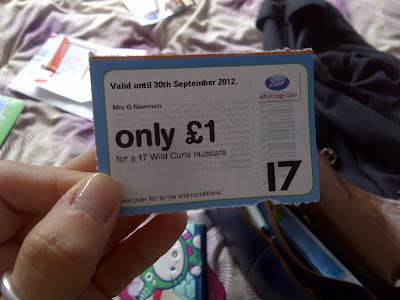 I did one of them double take, and then i zoomed in and went Ooooooooh - ripped it out and skipped to boots to buy said Mascara. Thankfully they actually had it in stock!
My Initial impression was that for £1 it was a Bargain! - RRP: £6.29 - Colour i bought was 'Wildest Black' So it was even better when i was able to pay with my Boots advantage card points!!! FREE MASCARA!!! *HAPPY DANCE*
So i got to use trying this baby out, and here is the Before Picture..
And after a splash of Wild curls No.17 Mascara (I havent curled my Lashes before hand either i might add)
For the price i bought it at i think its a really good Mascara, and i would get it again, however i think £6.29 is quite expensive for what it is. My soap and Glory one is so much better and only £9.99, so maybe i will wait to see if its on offer again. Although i dont go through Mascara quick enough, so they will probably have another even better one by the time i come round to buying a new one again! haha
I would recommend this to people as i've had so many compliments lately by people saying Ooooh i like your eyelashes, and Oooh your eye make up looks nice.. So thumbs up from me!
*I wasnt sponsored to write this post, all my own opinions and bought with my own moolah.
Email Post
Labels: Beauty Review