What happened in Vegas .... Offical Day 1 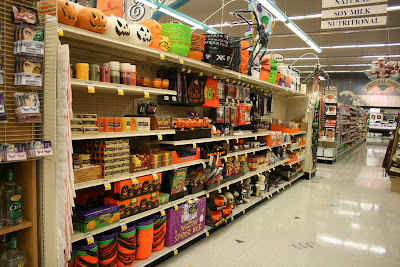 JetLag = waking up Really early.
I woke up at 3am, then managed to sleep until 6am, then thought i'd just get up as i could hear everyone else moving about in the kitchen. The morning was spent having a little swim in the pool, generally just chilling, chatting and getting used to our surroundings.

Then we hit the supermarket, not so much for some, but for me... oohhhhh i was in heaven!
there is nothing i love more than American shops, its like my Mecca.
I love the way they go all out on Halloween, its so alien to me as in the uk they are not that Halloween'y'.
Baring in mind this aisle of halloween dec's were there on the last week of september! i couldnt believe they had them in the supermarket already. 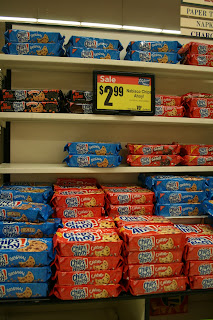 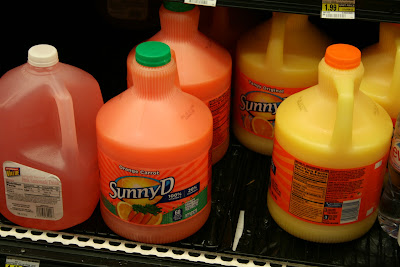 They had my fav's Chip's Ahoy! and i bought a packet of the Light ones.. ya know, to be good before the big day. :) Oh ohhh and my other fav, Sunny D!! although over in the States there in Gallon bottles! you'd be lucky to get a Litre bottle in the UK lol
We spent the best part of $200 on food for the week, and it didnt even last the week.. haha!
The Afternoon was spent with my cousin Steph and her Husband Darrentrying to get our Marriage license, we went to the wront place initially which was annoying as the Dodge chargers Aircon wasnt working 100% so man we were H-o-t!!!
Straight after getting the License we had to go and hot foot it over to  the chapelfor a meeting which we were 45 mins late for! eeeek... they were so nice though and didnt even mind that we were late. Very accomodating. 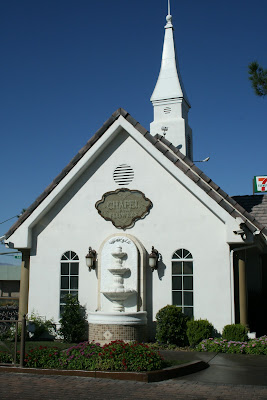 In the evening we went to a place called... Dicks last resort. All i can say about this place is... there a bunch of dicks. would never go here again if i went to Vegas! over priced, service was rubbish, food was yukky. The music was good there though, and the atmosphere was ok - ish.
Here is some photos of the night in general and ill let the captions explain the rest...
Come back for another update!
Email Post
Labels: Las Vegas wedding