We only had a few days of Honeymoon, so we woke up early and went out with mikes brother Steven for the day.
We set off with food in mind, so we went straight to the Fashion show malls food court, i went to somewhere called Jac & Ray. It did grilled sandwiches, salads etc and they were Yummy! i had a grilled veggie one, and they made them fresh from scratch which is rare for fast food! The boys both had KFC, so they were happy. 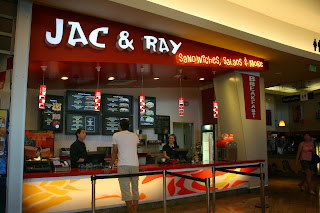 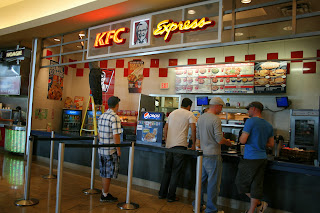 We then went ona sneaky trip to the shops in the Mall, but im saving all shopping related stuff for its own post! (so keep an eye out for that)
We then set on our travels down the Las vegas Boulevard to get to the first hotel, which was the Mirage.
To get there we walked a bit, first we went through the Treasure Island hotel as i wanted to see the Pirate ship, annoyingly they only do the shows in the evening so we were not going to hang about for another 6 hrs!

We carried on walking for what looked like a short walk... no walk is short in Vegas.. the buildings are SO large, they trick you! :) 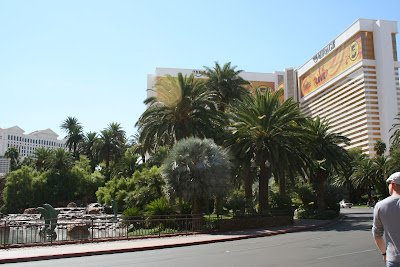 The Mirage is such a nice looking hotel, there is big ponds outside the front with statue, and palm tree's a real paradise. 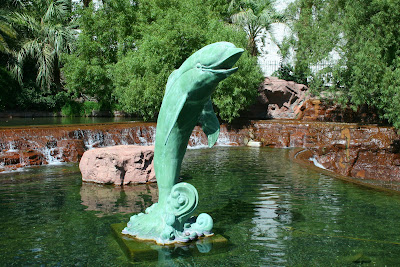 Once inside the hotel there was an amazing lobby, it had a waterfall and palm tree's more statues, it was hard to get a proper photo as it was just to big! They had done the place up for Autumn and there was pumpkins and mini ones everywhere, it looked lovely.

After a treck through the Hotels Casino floor we went outside to the Dolphin & White Lion Habitat.
I really wasnt expecting much, i even thought it would be free, like the MGM's lion habitat.
It was about $18 to get in, which at the time seemed alot... But once we got in there and it was like a mini seaworld, we couldnt believe it was in a hotels grounds! 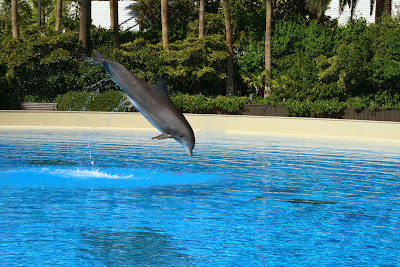 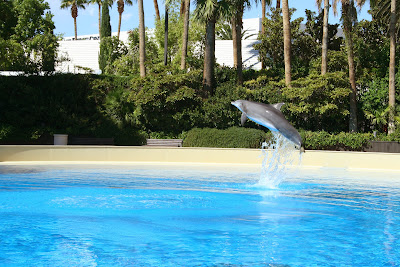 The mummy Dolphins were so sweet, they were so protective of their babies, everytime the babies swam off the mums chased after them and brought them back to the edge where the trainers were.

We had a wander around the Birthing tank, then moved onto the main tank where the trainers were swimming in with them, and they were feeding them some fishies. ♥ 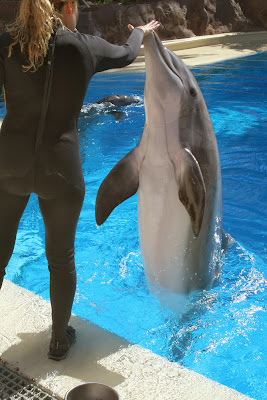 They also had an underwater viewing section, so we had a little look down there and it was sooooo amazing to see them swimming around. 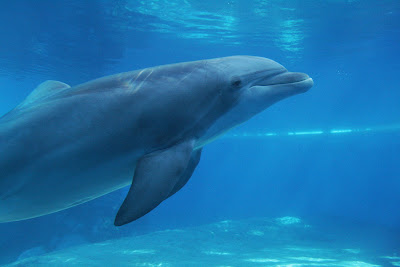 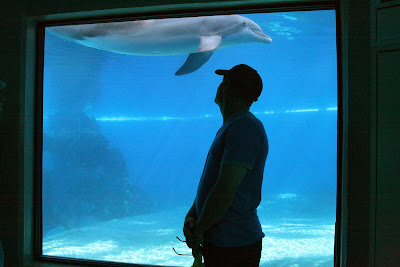 In the dolphin Habitat they also had a lion sanctuary called 'The secret garden' this was all secluded and shady, it had Leopards, & White lions, tigers. Like most tourist places they took photos of you as a souvenier, they did them against a green screen so they super impose you onto a background of your choice.
Quite funny some of the photos, we chose the ones which were less cheesy.. well we tried lol.
The photo's we bought were $22 for 2 so we got a nice one with us and some Lions, and one where we were stood in front of the Las vegas sign. 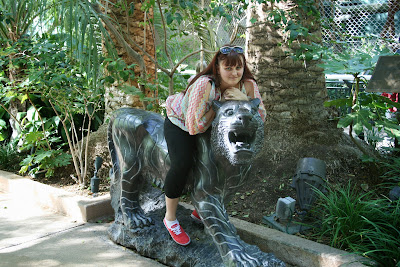 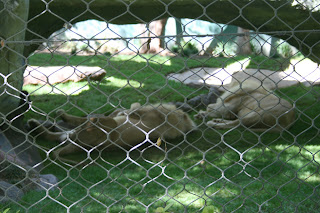 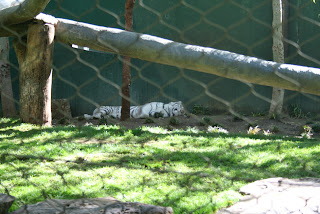 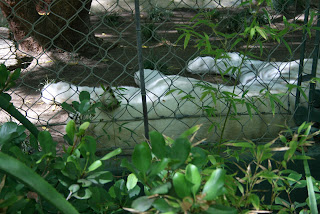 The lions and tigers were all asleep as it was about 40c. Hot hot hot!
Lovely couple of hours there so glad we went.
Then we went on a treck to the Mandalay Bay hotel which was on the opposite end of the strip... seriously mileage for the feet. So we walked to the nearest mono rail station which took about 30mins.. ughhh, i think it was in the Imperial palace hotel in the end. It cost us $5 each to get all the way down to the MGM grand  hotel monorail stop. We then got off and walked over the intersection to the Excaliber hotel's monorail which then took us to the Mandalay Bay... told you nothings close by!

We came to Mandalay bay specially to goto the Shark reef aquariam, it cost $18 each to get in, but if you pay $30 you get a free gift, entry and a souvenier photo! so we paid $48 to get in and i got a shark teddy, we chose a photo of us where were standing in front of the walk through tunnel. its cute ♥ 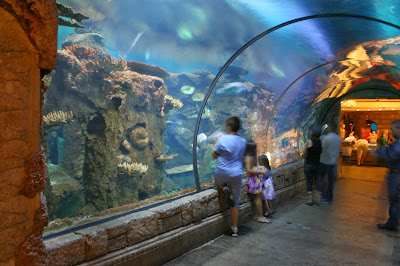 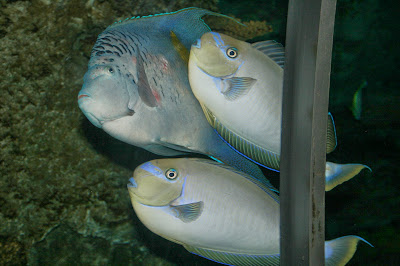 The aquarium had a komodo dragon, some other lizards, and snakes too, which was cool.

In the actual shark reef part they had so many different types of shark species, alot i had never even seen before, one looked like a hedge cutter! haha 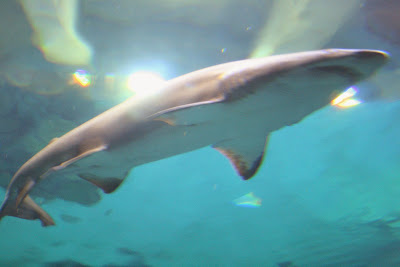 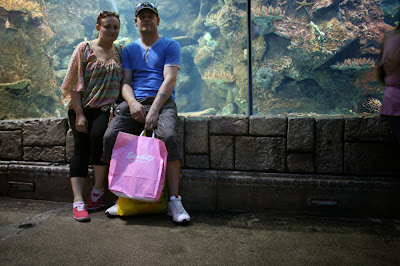 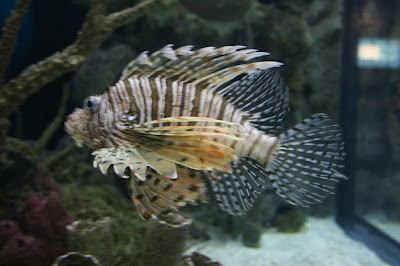 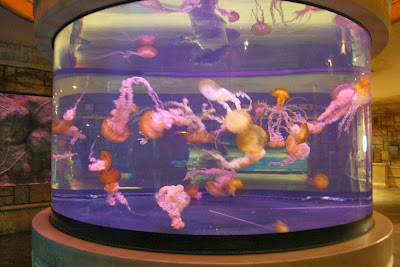 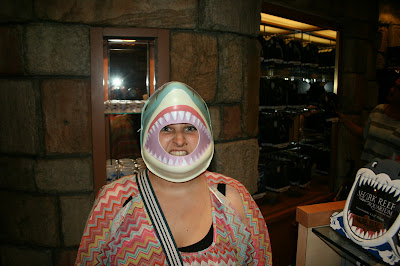 I love gift shops - FACT! although as i got the shark teddy and photo with my entry ticket i didnt buy anything. Another good couple of hours out, but it couldnt beat the dolphin habitat. ♥
Email Post
Labels: Days out Las Vegas wedding