I have a few Avon Mascara's and i thought i would compare them and show you what they have to offer... I also want to show some felt eyeliners ones amazing and needs a shout out, ones not worth the light of day...

I did this mainly as i was so bored the other night, and also because its a bit annoying with Avon as you cant try it out, or see the products in person before you hand over your Moolah.
(Although Avon has a no quibble guarantee which is pretty awesome!)

I bought this a while back (they are currently giving it away with a magazine.. although i cannot remember which ones...)

This one has a curved Brush, which i suppose is to give you more of a Curl.. personally i cant really say i noticed extra curl in my lashes, but it does give a slight curl to them. Its a nice mascara overall.

Next Avon one i have is the Avon Super Magnify Mascara, again i saw this free with a magazine but google it to find the name if you want to get it as a freebie.. 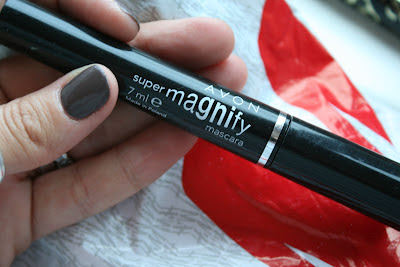 For me this mascara is best used in preperation for adding volume and length when using another mascara on top of it, Its lacking Volume when used on its own. I always use a coat or two of this and then stick lashings of my Soapy & Glory one on top, or the Max factor masterpeice mascara tester tube im trying over the top and its like WOW eyelashes galore!

I do like this Mascara, and i would be tempted to buy another when this runs out, but only to use as a base for other Mascara's, i love the way this seperates your lashes.


This brush is pretty awesome for seperating im pretty sure its nothing to do with the actual Mascara formular.

Next is one product thats bloody amazing and well worth the £2 i paid for it... the other is absolutely CRAP, and wasnt worth the £1.50 i paid and i would never buy it again nor recommend it to anyone.. 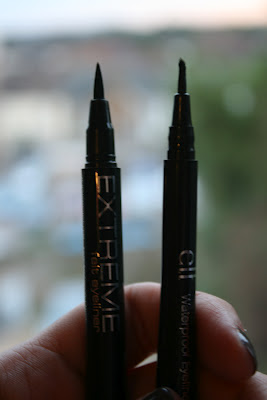 The MUA one on the Left is so amazing, its on par with the Supercat eyes Soap and Glory one which is £6, this one from MUA is only £2 !!! totally bargain, and WELL well well well x1000 worth the money!!


The one on the right, from Elf is crap. Look at the felt tip on it... it reminds me of when i was a kid and my felt tips dried out and i had to stab the life out of it on the paper to make the colour come out.. you cannot get a straight line out of it, and it was practically dry when i recieved it.


I hate having to say bad things about something specially as its only cheap, all the other Elf products i've used have been great, but this is not worth it... sorry Elf! :(